Voice, data, and video traffic is exploding as smartphones, IP TV, video streaming, and "cloud" based services takeoff.  A majority of the backbone transport for these applications continues to be SONET and SDH optical transmission networks.  A dominant protocol for IP transport is PoS (Packet over SONET) and another is ATM (Asynchronous Transfer Mode).  Both schemes are packet based, with ATM using fixed size packets of 53 bytes called "cells", and PoS using variable packet sizes closely matching to Ethernet frames.

GL's LightSpeed1000™ hardware platform (PCIe Card and USB Pod) is capable of OC-3/12 and STM-1/4 wire-speed processing on quad optical ports for functions such as wire-speed recording and wire-speed playback of Unchannelized and Channelized ATM, PoS, and RAW Traffic. The 2 out of the quad ports are meant for SONET/SDH unchannelized and unframed data. The remaining 2 ports can be either SONET/SDH or GigE (future) ports meant for channelized data.  The LightSpeed1000™ comes with software for overall monitoring, BERT, emulation, and protocol analysis with a price tag that compares very favorably with similar test instruments at three times the price.

Normally, the LightSpeed1000™ is used for protocol analysis of ATM, PoS, Raw unchannelized and unframed data. Recently support for channelized structures has been added. In an OC-3/STM-1, all 84 T1s or all 63 E1s can be identified and processed in transmit and receive modes. The hardware can also be easily configured / programmed for delaying of ATM Cells or PPP packets. 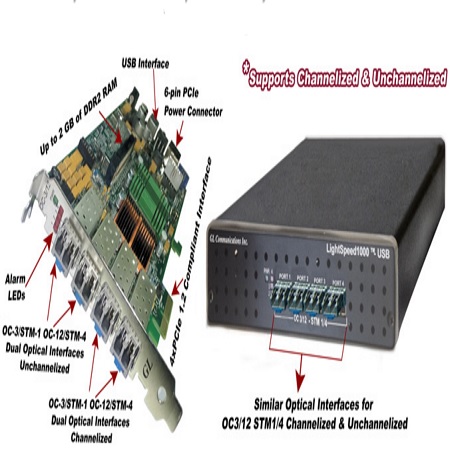